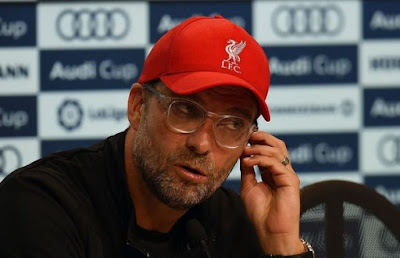 Jurgen Klopp has urged his Liverpool players to fight with every fibre of their bodies for the Premier League title, while also issuing a rallying call to supporters.
The Reds host Bournemouth at Anfield on Saturday, knowing victory will take them back to the top of the table with a three-point cushion before Manchester City host Chelsea, live on Sky Sports on Sunday.
After dropping points with consecutive draws against Leicester and West Ham, Liverpool’s title credentials have come under scrutiny despite Klopp’s side being defeated only once all season.
Of the reaction to City making up ground on his men, Klopp replied:

“I didn’t read or watch it but I still know it. We know if you want to be top of the table and champion at the end of the season you have to show real passion, real desire, you have to fight that’s what you have to do.
“I got a message this week – and that’s another sign that maybe people think I need help but thank you very much I’m fine – it said in the last 12 games City dropped 10 points and we dropped seven. I didn’t know that because I don’t think like that but obviously the view from outside is completely different.
“The only tool we really have to sort our situation is football and is passion and a proper fight – being aggressive in the most legal way.”

2019-02-09
Jardo9ja
Previous: Jay Jay Okocha Reveals The Club To Win The Champions League This Season (Guess Who?)
Next: Do You Agree?? “Stand-Up Comedy Is Dying In Nigeria” – Basket Mouth Cries Out

Brother allegedly stabs his brother over a N100 drink.

Timi Dakolo drops a new record “TAKE” With help from Olamide and Pheelz this song ...

Akpororo AKA roro king a popular comedian in Nigeria and also The captain of odic ...

Skiibii in collabo with Obesere drops this new song titled “Egungun” Without hesitation, Skiibii jumps on the ...